An Atlas of the Birds of NSW & the ACT

A Review of Volume 1 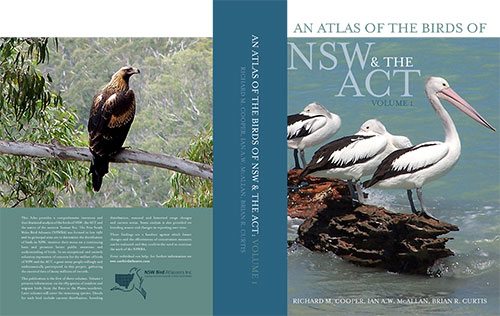 This Atlas draws on ~5.6 million records. Volume 1, the first of three, contains 720 pages of detailed information on 183 birds (breeding and/or regular migrants) from the Emu to the Plains-Wanderer. Volumes 2 and 3 will cover all other NSW/ACT species.

For each bird details include maps, graphs, tables and text on current distribution, breeding, seasonal and historical change and assessment of current status.

This information thus provides a better understanding of the status and needs of each species and where to best concentrate conservation management efforts as well as a baseline against which future studies, environmental trends and conservation efforts can be measured.

Dr Major comments positively on the considerable benefits flowing from the NSWBA’s commitment to the long-term collection of the data in NSW and stresses that such a work was beyond the vision of any government jurisdiction. He adds that “mapping the fine-scale distributions of each species is just the launching pad, with the Atlas also providing an invaluable index of changes in species occurrence over time. Critically for conservation assessments, these changes are recorded over a 25-year period, providing the multiple-generation time frames necessary to assess population trends using IUCN listing criteria.”

“These quantitative data have already proved to be highly influential in (assessing and) listing threatened species such as the Little Lorikeet and White-fronted Chat under the NSW Threatened Species Conservation Act. The Atlas will have even greater influence in the future now that the data, including seasonal distribution maps and temporal trends, are available in printed form.”

Dr Major points out also that the NSWBA Atlas places “its quantitative survey data in a long-term context by providing an assessment of historical changes in species distributions and status. This historical treatment has unearthed a wealth of early records that are not discoverable on-line, and aside from strengthening the novel data, the comprehensive scholarship that has been invested in the compilation of these records makes a precious resource its own right”. He therefore believes that the NSWBA “Atlas will prove an invaluable tool for scientists and wildlife managers and will result in more cost-effective conservation management.

Conservation intervention is most challenging when delayed until a species is obviously in trouble and this is clearly apparent from the difficult, expensive and uncertain quest to prevent the extinction of flagship species such as the Regent Honeyeater and Orange-bellied Parrot. An Atlas of the Birds of NSW & the ACT provides an early warning system, flagging species that should be monitored closely and providing the basis for targeted research and conservation. It also enables the detection of biodiversity hotspots and critical locations in a species’ range that might be added to the conservation reserve network before the species requires direct conservation intervention.

This publication would be of interest to all libraries and academic institutions with an interest in Australian natural history subjects, particularly ornithology, as well as birders and anyone else interested in Australian ornithology.”