The John Hobbs medal was once awarded by the NSW regional group of Birds Australia, but since 1999 has been a national award which is conferred for outstanding amateur contributions to Australasian ornithology. 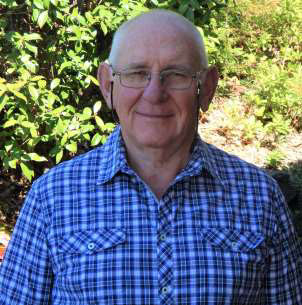 For the last 50 years Dick Cooper has been working quietly in the background making a significant impact on NSW and Australian ornithology. His major achievement has been in Field Atlas work, but he has also donated his time and effort to other birdwatching and ornithological ventures. Despite a busy professional life, he has always found time for bird study, heading bush and sharing his  knowledge with other people.

From childhood in the suburbs of Sydney interspersed with schooling in Melbourne, Dick took up birdwatching. By the mid- 1960s Dick had settled in Hornsby in northern Sydney, and joined bird clubs – notably, the NSW Field Ornithologists Club (FOC), formed at much the same time as the break-up of state-based branches of the RAOU. Dick was involved in the Club’s birdwatching outings – usually local, but often overnight camping in remote areas such as inaccessible parts of the Blue Mountains. Dick often went with a dedicated group of birdwatchers including Terry and Ann Lindsey, Margaret Cameron and Ted Nixon.

Dick became the RAOU’s Regional Representative for NSW in 1972, and he served on the committee of the FOC from the mid-1970s until the 1990s. He was the first FOC Newsletter editor from 1974–1978 and was its Records Officer from 1988–1992; editing its annual bird reports for the years 1985–1988. He has been the Chairman of the NSW Ornithological Records Appraisal Committee since its inception in January 1992.

In 1969, he conducted bird surveys for the Colong Committee (now the Colong Foundation for Wilderness Ltd), which played a role in saving the Colong and Billy’s Creek Caves from destruction by mining. It’s now part of the Kananga–Boyd National Park.

This was perhaps the turning point in his ornithological career, the blending of hiking into remote areas with birdwatching in a systematic way: Atlassing. Dick was first introduced to Atlassing via the RAOU Pilot Atlas Scheme, with fieldwork on the South Coast of NSW running from March 1973 to September 1974. Dick was so immersed in its operation that when John Disney needed someone to persuade Stephen Davies that the data for the proposed Australian Atlas should be collected at a 10-minute rather than 1-degree level, he invited Dick around while Stephen Davies was visiting – with Stephen eventually succumbing to their combined badgering.

When the First Atlas finally began, Dick volunteered, and spent the next five years as the Regional Organiser for Eastern NSW, an area that included the northeast part of the State south to Nowra and west to 147° E. Dick took on the task of having birdwatchers visit every 10-minute grid in the area. After an immense effort, organising campouts to remote areas and dragging family members and prodding friends to do the same, as well as organising his own group of volunteers to help with paperwork such as sheet-checking to make sure the localities were correct, all grids were visited by the time Dick had organised the last campout at Werrikimbe National Park in December 1981.

Before the end of the First Atlas, Dick, with Rod Cox (the Regional Organiser for Western NSW), arranged for a flier to be sent out with the Atlas Newsletter asking if anyone wanted to continue Atlassing in NSW and the ACT. He also approached the RAOU Board as well as the NSW FOC for backing of an on-going Atlas. As neither group was supportive, Dick and Rod, together with Don Howarth, started the NSW Bird Atlassers using the same methodology as the National Field Atlas.

Dick has been either the Co-ordinator or Treasurer of the NSW Atlassers from 1981 onwards, always in one of these roles. Through the sheer force of his personality Dick has ensured that Atlassing has continued unabated, encouraging new or dormant members, and raising finance where necessary. He has moved around by work and family commitments; including to Hornsby, Wodonga, Albury, Medowie and now Safety Beach near Woolgoolga, but always linked up with local bird groups and birdwatchers and enlisting Atlas members. He was involved with the formation of local sub-groups of the Atlassers when no local bird group existed – the Tomaree Bird Watchers and the Coffs Coast Bird Atlassers Group.

Dick, ever mindful of the 10-minute grids not yet visited, organised regular trips to the western half of the State – initially minibus trips with Bert Bolton, but eventually just invited birdwatchers who only had Atlassing in mind. One particular six-week trip in October and November 1997 visited over 120 grids not known to have been visited by a birdwatcher in the previous 50 years, if at all. There remain only a very few western 10-minute grids in NSW not visited.

It needs to be emp 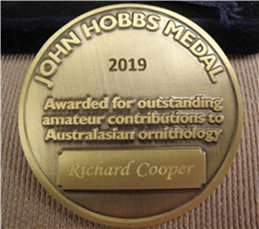 hasised that Dick’s continuation of the NSW Bird Atlas with the same methodology as National Atlas 1 has meant that there can be comparisons of distribution and abundance measures in a direct way. Indeed, NSW Bird Atlas data were used in the lobbying to fund National Atlas 2 and later to standardise its data. Data are still being collected in NSW using the First Atlas methodology, and this will mean further comparisons can be made into the future. Furthermore, data in the published NSW Atlas volumes 1 and 2 vindicate the listings or uplistings of many threatened NSW birds, given that the initial evidence was a tenuous comparison of national Atlas 1 and 2 that used different survey methods. NSW Atlas volume 3 will likely do the same and identify further threatened species.

Dick is a Life Member of both BirdLife Australia and the NSW Bird Atlassers.

Dick has been willing to help new birdwatchers and to help in ornithology in other ways. He has run regular outings with other birdwatchers at every location he has been resident. Dick and his wife Barbara together ran the Mist Net Service for the Australian Bird Study Association from late 1999 to the end of 2005 when ABSA needed someone to fill the void. Dick’s significant contributions to NSW and indeed Australian ornithology and bird conservation make him a most worthy recipient of the Hobbs Medal.