NSW Bird Atlassers run Autumn and summer/Christmas camps.  Information can be found in our newsletter, or by contacting the field trips officer.

The Autumn Camp was held at Gum Bend Lake, 3 kilometres west of Condobolin in central NSW, from 1st to 5th April.

It is well known that 90% of NSW has been badly affected by drought for several years and the Condobolin region is no exception.  The expectation of finding many birds in the barren landscape was low, despite some recent storms which had deposited about 40mm of scattered rain.  Despite the drought, the total number of species recorded for the camp was 133, which is comparable to most camps in better times.

Eight atlassers surveyed 36 ten minute blocks, most of which were severely dry and had not received recent rain.  The highest count of species reported was in the Condobolin block, with 77 species due to the proximity of Gum Bend Lake.  The lowest count was 16 species in the Wilga Trig block, SSW of Condobolin.  Here surface water was almost non-existent. 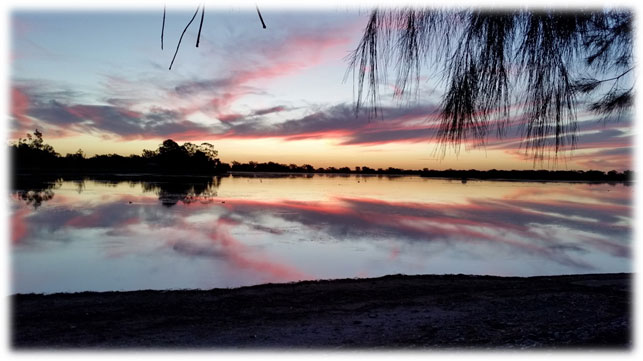 Report on 2018 Spring Camp at Gulargambone

The area covered ranged from Coonamble in the north, Gilgandra in the south, the Warrumbungle National Park in the east, and the Macquarie Marshes in the west.  This entire region was in drought, and it was most unexpected to find the number and variety of species.

The highest count ten minute block was “Wallamgambone”, located in the Macquarie Marshes, with a total of 70 species.  The lowest count was 16 species in the ten minute block “Balagula Lagoon”.  Ironically, there was no lagoon to be seen! 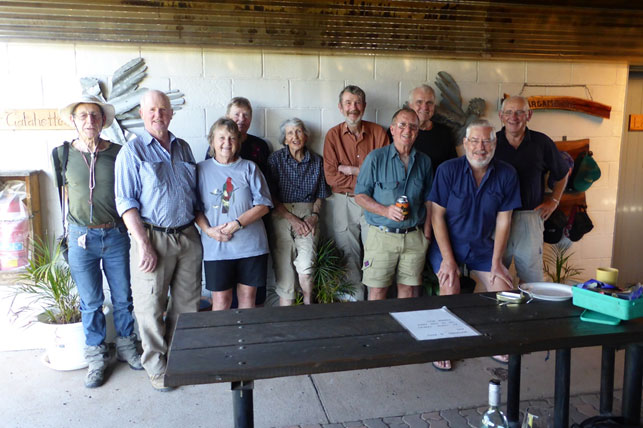 The 2018 Autumn Camp will be conducted from Monday 30th April to Friday 4th May and our base camp will be located at Ben Halls Campground in the Weddin Mountains National Park, approximately 32km west of Grenfell.

Directions:
On the Mid Western Highway (Grenfell/West Wyalong Road) turn into Back Piney Range Road 5.5km west of Grenfell.  Follow the signs indicating “Ben Halls Cave” for 22.5km to Weddin Bird Trail No 10; turn into the trail and travel 2.6km to a T intersection; turn left and travel for 200m to Ben Halls Campground.

Facilities:
Camping is free.  Facilities include composting toilets, free gas barbeques, picnic tables and shelters, sites for caravans/camper trailers, and plenty of sites for tents.  However, there is no electricity or water.  You need to be self-sufficient for food and water. Open fires are not permitted.  Fuel and groceries can be obtained at Grenfell.

These were some of the 159 species recorded for the duration of the camp, which was attended by 13 Atlassers.  Our base was on the shores of Yarrie Lake, situated 28 km west of Narribri, and close to the CSIRO Radio Telescope Array.  A total of 35 ten minute blocks were atlassed, covering the northern end of the Pilliga, broad acre cropping, grazing lands for sheep and cattle, and some areas of cotton growing.

On Thursday evening, 26th October, the NSWBA Annual General Meeting was held, followed immediately by gale-force winds and a smattering of rain.  A summary of the AGM matters appears elsewhere in this newsletter. 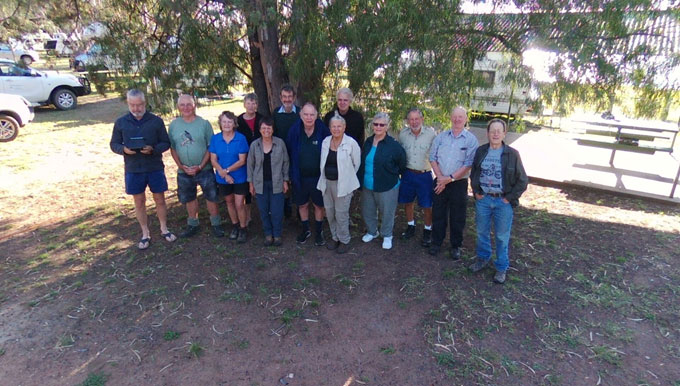 Our autumn camp was conducted from 1st to 5th May.  Despite torrential rain and major flooding (the aftermath of cyclone Debbie) several weeks before our autumn camp, twelve atlassers arrived in Mullumbimby to survey 20 ten minute blocks bounded by the NSW/QLD border in the north, to Ballina in the south, and from the east coast to Casino in the west and back to the border.

There are many varied habitats in this area ranging from coastal, mountain rain forest, rural land, and intensive macadamia orchards.  Access was to prove a problem, with many roads badly damaged by flooding, some bridges washed away, and landslips on mountain roads, necessitating atlassers to detour many kilometres.  However, 18 ten minute blocks were satisfactorily surveyed producing a camp total of 137 species.

Highlights were Plumed and Wandering Whistling Ducks, Eastern Reef Egret, a breeding record for Royal Spoonbill, 11 species of raptors, 13 species of Doves/Pigeons/Fruit-doves, Forest Kingfisher, Noisy Pitta (rescued unharmed from a domestic cat by locals), Logrunner, and Paradise Riflebird.  The highest count for a ten minute block was the Cape Byron block (28 35/153 35) with a total of 85 species recorded. 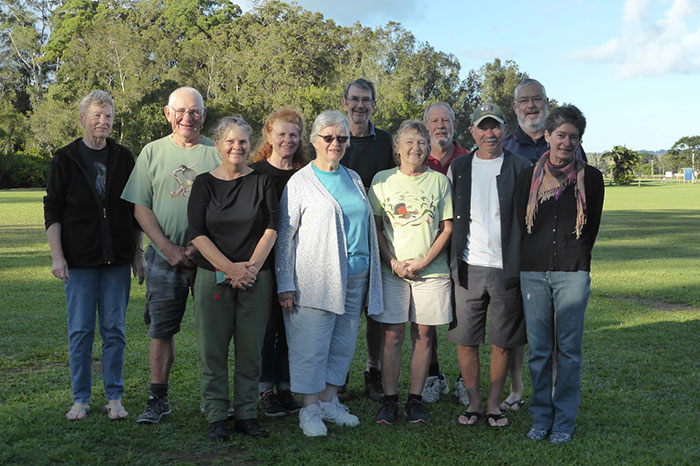 Batlow, best known for producing apples, is a small town situated in the south-west slopes region of NSW, on the edge of the Great Dividing Range at 775 metres above sea level. It was the base for the 2016 Summer Camp held in November.

At the time of the camp the surrounding country was in spectacular condition following a wet winter and there was an expectation of a bumper apple crop due to be harvested around December.

Whilst there were many and varied birds to be seen, it was most notable that waterbirds were few and far between. This was reckoned to be the result of recent flooding in the Lachlan, Murrumbidgee, and Murray River systems, where the waterbirds had gone west to breed in the newly-flooded swamps.

The elevation of the survey area ranged from 232 m above sea level at Gundagai, 305 m at Tumut, 775 m at Batlow, to over 1900 m in the Kosciusko National Park. The snow-covered slopes of the Mount Selwyn skiing area could still be seen from Tumbarumba township. Several ten minute blocks were dominated by pine plantations which produced low bird counts.

Sixteen atlassers and three guests took part in surveying 31 ten minute blocks for a total species count of 159 for the camp, with 21 species recorded as breeding. The highest bird count was recorded in the Tumut block as a result of the Tumut Wetlands at the edge of town.

A special thanks to Gene Vanzella, retired apple grower, ex-Mayor of Tumut Shire, keen nature lover and bird watcher. Gene revealed many of his personal birding spots, and related the history of the region from apple growing and gold mining, to construction of the Snowy Mountains Scheme in the 1950’s. Thank you Gene for your hospitality. 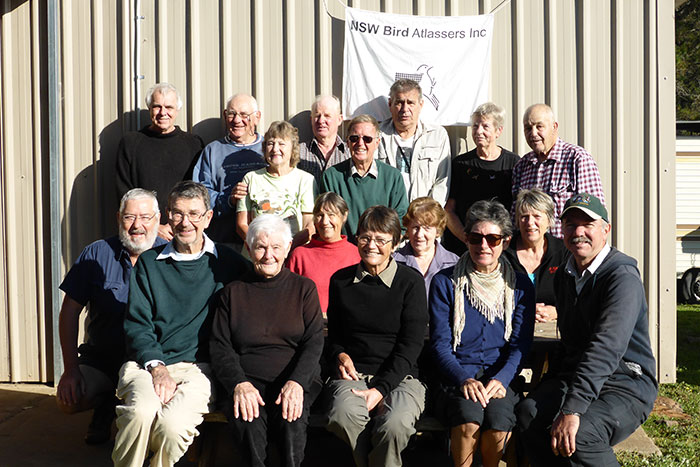 We’ve all heard the saying, “out the back of Bourke”. Well, the 2016 Autumn Camp was held there, from 4th to 8th April. Strictly speaking, the camp was south of Bourke at Gundabooka National Park. The aptly-named Dry Tank Campground was the camp headquarters, from where five members ventured out atlassing each day.

The area was well into drought, with no water to be found in creeks or stock dams. Daytime temperatures reached 38C each day, so the few birds about would find a shady spot and shut down. This meant that atlassing was only viable from sunrise until about 9am each day.

Nineteen ten minute blocks were surveyed, ranging from Bourke to Cobar, including Louth (where the local pub produces a very good lunch and has nice, cold drinks). A total of 94 species were recorded for the camp – a very good number considering the conditions. The highest species count for a block was 44 at Bourke. This was a result of water and shade being readily available in the township.

Thank you to Frank and Wendy Ball, Jane Paul, and Ann Mannion for making the trip “out the back of Bourke”, and for their dedication in atlassing in such trying conditions. 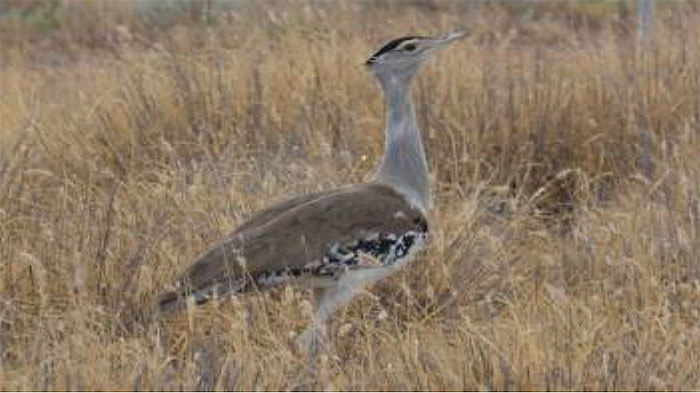 If you require more information, contact the Activities Officer, Rod Cox, by phoning
02 6552 7037

In a departure from tradition, the first Summer Camp was held in lieu of a Christmas Camp.

Thirteen members gathered at the campsite situated beside the Lachlan River at Euabalong, central NSW, for five days of atlassing the surrounding area. In all, there were 35 ten minute blocks to be surveyed, covering various habitats, including sheep, cattle and grain country, riverine and flood plain, to mallee at Round Hill Nature Reserve.
Grain harvesting was underway in the area and as a result there were eleven species of parrots and cockatoos to be found in large numbers.

Luckily, the heatwave conditions of the days preceding the camp did not continue, with fine weather ranging from high 20’s to mid 30’s during the days. No rainfall was recorded.

Ten intrepid atlassers attended the Easter camp held at Goobang National Park, Wanda Wandong camping area, braving the likelihood of predicted rain for the Central Western Slopes. The camp site was situated at the northern end of the Park, about 60 kms by road SE of Dubbo and was close to sealed roads which made convenient access to most grid blocks. Prior to Easter the entire region was very dry and parched with very little or no water in property dams and creeks.

We were fortunate that for the first three days a little of the much-needed rain fell during the evenings, with some light showers falling around mid-day on Saturday. As a result, for most of Easter we were able to get about and access our ten minute blocks. On the Monday morning the rain started to set in bringing with it a touch of Autumn weather.

Dick Cooper remarked that he was talking to a local farmer in the area who had told him that he had gone out of his way to remove feral cats and retain the undergrowth on his property and now has flocks of > 40 Double-bar Finches. The farmer now recognises the need to retain undergrowth, and advised that his neighbour had similar ideas. This appears to be an encouraging sign that some farmers are concerned about habitat loss on their properties.

Calling every morning and throughout the day at the camp site, in a cacophony of sound, were Noisy and Little Friarbirds feeding on the Ironbark blossom, with occasionally Superb Parrots winging their way through.

The camp site is in a very nice area, clean and infrequently visited, a good spot and very enjoyable. Thanks go to our Activities Officer, Rod Cox and partner, Ann Mannion, (who were not able to attend) for organising the camp.

Seventeen keen atlassers attended the Christmas Camp, based in Barraba, approximately 100km north of Tamworth.  Two months prior to the camp, the area surrounding Barraba had received very little rainfall, and as a consequence, farm dams and local streams were bone-dry.

Day 1, Boxing Day, produced thunderstorms which resulted in a heavy shower for Barraba. Later that night, steady rain began to fall, resulting in the following day (Day 2) being entirely washed out!  On Day 3 of the camp, atlassers braved the scattered showers and muddy roads to venture out and about.  The weather turned cool and fine for the remainder of the camp.

[30 25/150 25], situated immediately west of Barraba, which totalled 103 species!  Four other ten minute blocks to the north and northwest of Barraba produced a count of over 70 species per block.