The 2020-21 Little Tern nesting at Karangi Point is a detailed report prepared by Andrew Robinson and Nick Carson.

This is an excellent and positive example of the Central Coast Local Government’s efforts to protect a threatened species.

The endangered Little Tern arrives from South-east Asia to Australia each spring to breed on our beaches and estuaries. Little Terns have historically nested at the mouth of Tuggerah Lakes, The Entrance with varying degrees of success. The 2020/21 breeding season saw a significant influx of Little Terns to the area and subsequently, record-breaking breeding success.

With Little Terns first being observed at The Entrance Channel in late-September 2020 and continuing to build in number throughout October, it was apparent that something of an exceptional breeding season was in the making. Having recognised this the Central Coast Council committed additional resources to effectively manage the site and provide every opportunity for breeding success.

The sandspit known as Karagi Point and surrounding areas are popular sites for recreational activities including fishing, boating, beachgoers, swimming, surfing, picnicking, dog and beach walking. These activities which increase throughout the warmer months can have a negative impact on the Little Tern nesting season which is from October to February.

As Little Terns lay their eggs directly (into a scrape) on the sand, relying on camouflage to hide them and the resulting chicks, the species is particularly vulnerable to human disturbance at this critical time. Such threats include trampling and physical disturbance to eggs and chicks, discarded fishing line and rubbish, avian predators and dogs, inundation of nest sites and even vandalism. Fortunately, fox predation has not been an issue at Karagi point in recent years. 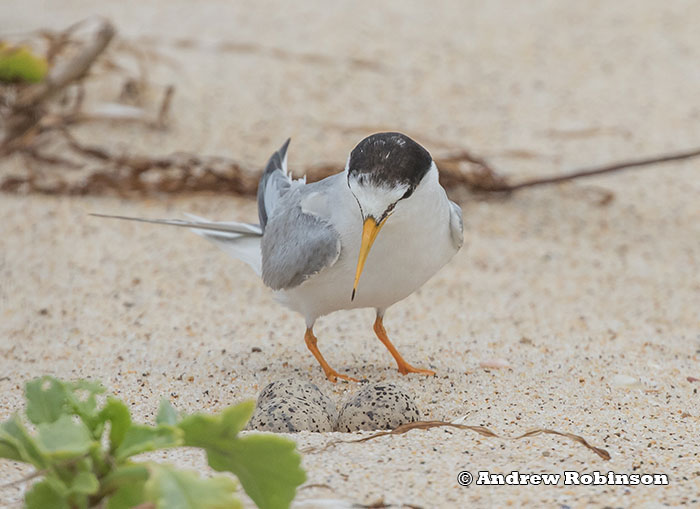 Recognising the suite of threats present, Council determined to plan, communicate and implement a range of best practice management actions to afford every opportunity for breeding success. This included the installation of secure conservation fencing that excluded people and dogs, the development of high visibility interpretive signage, regular litter collection to reduce the threat of entanglement and avian predation, a strong on-ground Council presence, and committing to a more effective communication and engagement strategy. A monitoring program in collaboration with National Parks and Department of Planning, Industry and Environment was also undertaken by Council staff, something that had previously been conducted in an informal capacity by volunteers.

Fencing installation was planned for early in the breeding season but to undertake this important management action we had to determine where preferred nesting areas where. This was done through site monitoring i.e. prospecting, courtship, nest scrape observations etc. Once this was confirmed we were able to identify the positioning and scale of fencing which was erected quickly and with minimal disturbance. Interpretive and regulatory signage went up soon after and the site was now easily identifiable to the public. It was hoped that early season fencing would contribute to colony / nesting establishment and overall breeding success by creating an ‘undisturbed’ area almost half a hectare in size.

It should be noted that Council was midway through a dredging project at this time. However, these works were strategically designed to coincide with returning Little Terns, enabling the closure of Karagi Point to the public during this crucial period, something that would not have been possible ordinarily. Once well-timed dredging operations had been completed and the area reopened to the public, access was much less of an issue as fencing was already in place. In addition, we were lucky enough to have an extended period of inclement weather which saw very few people accessing the area, a factor that is thought to have further assisted Little Tern nesting prospects.

As Summer (and the Christmas Holidays) approached we saw an expected increase in human activity which disappointingly resulted in significant amounts of rubbish and food waste being left on site. This was of concern as it led to an increase in avian predators (Gulls and Ravens) being attracted to the site and therefore in a stronger position to predate on Little Tern eggs and chicks. To mitigate these concerns Council made the decision to undertake daily rubbish collection and arranged for Ranger patrols to address compliance issues. On average 120L of rubbish, food scraps and fishing tackle were removed from site most mornings, with significantly more following a weekend. This measure saw an immediate reduction in both generalist species. The more robust fencing design was serving its purpose and we only occasionally saw the nesting area accessed by the public, including one such incident that led to the trampling of a nest (3 eggs). Weekly monitoring had commenced by this time and we were rewarded with encouraging early counts. 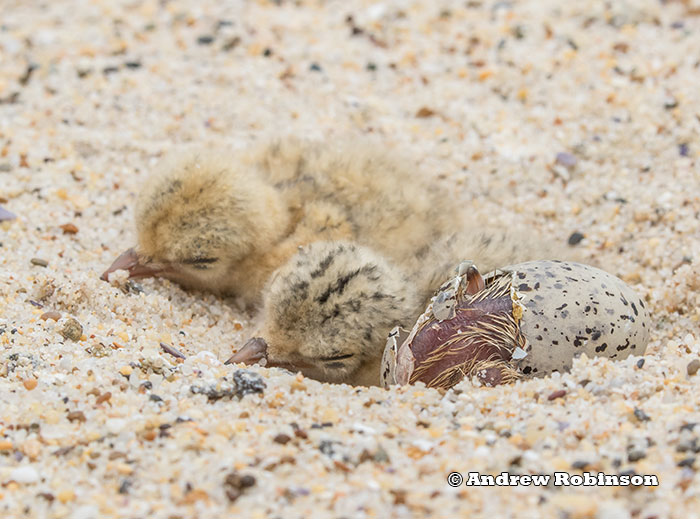 As the season drew to a close and Little Terns began to disperse to pre-migration staging areas the site continued to receive regular monitoring and reactive management as conditions, circumstances and impacts changed. Some of the challenges presented included high volumes of litter and increased visitation throughout the Christmas Holidays which in turn increased the threat of avian predation, vandalism of signage, placement of artificial shelters as vegetation died off leaving chicks more exposed, partial inundation which on one occasion very nearly claimed a few nests, compromised fencing due to high tides, water movement and sand loss, some minor unauthorised access issues and mobile chicks (runners) which not only placed themselves in vulnerable situations well outside fenced areas but also made monitoring counts rather difficult. To mitigate the threat posed by walkers and dogs to wandering chicks a series of additional ‘’barrier fences’ were erected adjacent identified chick / runner congregation areas.

Once monitoring efforts concluded in early February and data collection was reviewed, the following summations were able to be made:

What triggered this ‘breeding event’ can only be speculated, however a combination of environmental conditions and human-related factors are thought to have been contributory. As discussed, dredging operations and the closure of Karagi Point presumably played a part, however it’s worth mentioning food availability which was seemingly abundant in the adjacent Tuggerah Lake, with many local fishermen suggesting it was the most productive they’d seen the lake system in years. Also of note was the apparent suitability of Karagi Point as nesting habitat which involved significant recent sand deposition, extensive areas of exposed shell-grit, well positioned woody debris and the presence of vegetation that began to establish a few weeks prior to prospecting. 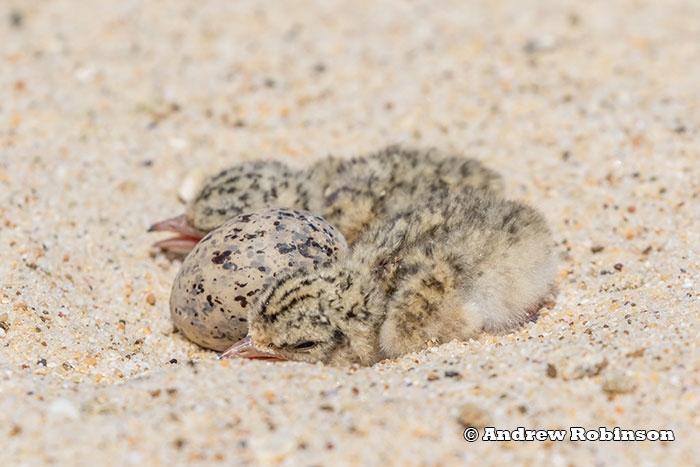 As is well documented, the importance of a large, functioning nesting colony can’t be overstated, and it was our experience that when Gulls, Ravens, Raptors and even Pelicans, posed a threat that breeding adult Little Terns were always able to successfully mob and drive away these avian predators. Indeed, having spent many hours on site, only once was a Little Tern chick observed as actually being seized by an avian predator (Eastern Osprey) which was immediately set-upon by adult Little Terns, only for the Osprey to quickly release the chick which scuttled for cover, seemingly unaffected.

From the outset Council recognised the many considerations and constraints involved with managing a conservation project such as this. Planning, consultation and securing funding was undertaken early to ensure that all potential stakeholders were aware of the project and proposed management actions. The requirement for a more robust and extensive temporary fencing type, along with a regular Council presence was identified early and key to achieving desirable breeding outcomes. Establishing the likely extent of the breeding colony early in the season and fencing at this time avoided disturbance to prospecting / nesting Little Terns. This in turn helped identify sensitive areas to the local community and public more broadly and ensured that they were engaged and adopted a level of ownership for the project, indeed this led to many in the community informally assisting Council with site monitoring. Another key lesson learnt is the ability to remain flexible and reactive given the suite of threats and impacts we’re aiming to address and the dynamic environment we are working within. In combination, these factors (along with a range of environmental influences that are poorly understood) are believed to have led to a record-breaking breeding season at Karagi Point. 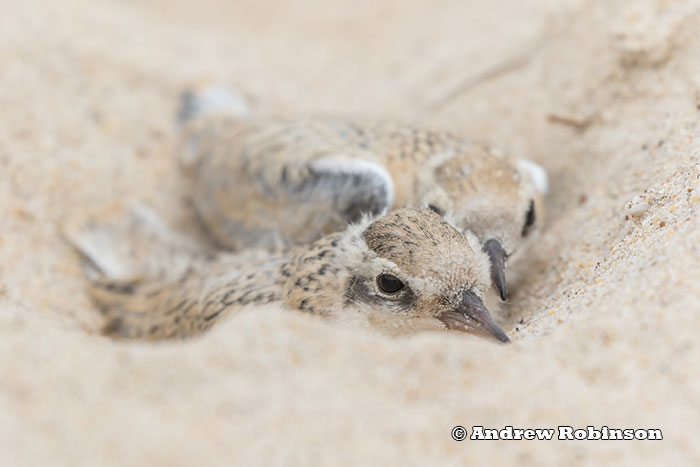 This incredibly successful breeding season can be attributed to best practice management, monitoring and communications, abundant food sources (indicating a healthy lake system) and broader ecological factors / environmental conditions locally. Given that the Little Tern continues to decline by approx. 3% annually in NSW, these results are very encouraging and highlight the importance of Karagi Point for the species long-term survival.

It is hoped that by raising awareness of the importance of Karagi Point for Little Terns amongst the community, more residents and visitors will move towards stewardship and greater ownership of the local environment and its importance, along with the role they can play in its management and protection.

Having now undertaken a whole breeding of monitoring and data collection there are several adjustments to this process that are planned for the 2021/22 season. It is hoped these minor improvements will lead to better data collection and less overall disturbance to nesting Little Terns.

It’s been nearly 6 months since the Little Tern departed our shores and as we await the species impending return, plans are already being made to ensure an even more successful 2021/22 breeding season.

This conservation project was resourced by Central Coast Council with technical and operational staff working in collaboration with external agencies such as NSW Department of Planning, Industry and Environment and NSW National Parks & Wildlife Service. Some additional site monitoring was carried out by volunteers from the Central Coast Group of Birding NSW.

A further article about the success is on Grapevine News Online